La Liga fined €250,000 for using its mobile app to eavesdrop on fans

Spain's La Liga has been slapped with a €250,000 fine by the country's data protection watchdog for breaking EU privacy laws. According to Spanish newspaper El País, La Liga used its official mobile app to eavesdrop on fans using their microphones and GPS to identify bars streaming games without a licence.

The app, which provides fans with updates and stats about football matches, surreptitiously used smartphones' microphones to record and relay background noise back to La Liga, 24 hours a day.

It then used audio recording technology to identify football games being played on TVs in the background, and matched the devices to a precise location to identify bars streaming matches illegally using geolocation features on GPS-enabled devices. Computing's Cloud Excellence Awards return on the 19th September 2019, recognising the very best of cloud computing in the UK across end users, suppliers and products. Who is the Cloud Architect of the Year? What is the Best Cloud Development Platform? And who is the Cloud Entrepreneur of the Year. Entry is FREE - the deadline is Friday 28th June.

The organisation used these technologies to compile and cross-check user data to work out offending bars and did so without users knowing. The app has been downloaded 10 million times.

Spain's AEPD data protection agency has concluded that La Liga broke data protection and privacy rules because it didn't explicitly alert users that their microphones would be used by the app for data collection purposes.

Despite being given a month to update the app, La Liga told El Pais that it will appeal AEPD's decision and claimed the technology "does not allow for the knowledge of the content of any conversation, nor can it identify its potential speakers".

In a statement given to Reuters, the company said: "La Liga disagrees profoundly with this decision, rejects the penalty imposed as unjust, unfounded and disproportionate and considers that the AEPD has not made the necessary efforts to understand how the technology works.

"As a result, it will challenge the ruling in court to demonstrate that its actions have always been responsible and in accordance with the law."

Computing and CRN have united to present the Women in Tech Festival UK 2019, on 17 September in London.

The event will celebrate successful women in the IT industry, enabling attendes to hear about, and to share, personal experiences of professional journeys and challenges.

Whether you're the ‘Next Generation', an ‘Inspirational Leader', or an ‘Innovator of Tech' this event will offer inspiration on not only how to improve yourself, but how to help others too. The event is FREE for qualifying IT pros, but places will go fast 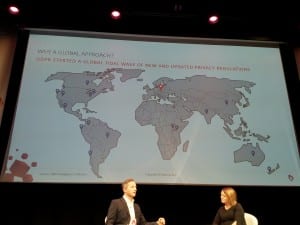